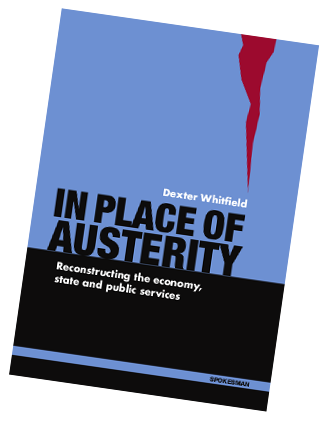 In Place of Austerity uncovers the realities of commissioning, localism, ‘big society’ empowerment fraud, and the systematic undermining of public services and the welfare state. It perceptively exposes the scale of disempowerment, dispossession and disinvestment, and analyses the dominant rationale, which continues to underpin the financialisation and personalisation of public services, accelerating marketisation and privatisation on an unprecedented scale.

This is a vitally important book for trade unions as well as for civil and community organisations. It provides a critical understanding of the issues and will aid their intervention in transformation and procurement of public services by forging strong alliances, taking industrial and community action, and advancing alternative policies.

In Place of Austerity sets out a framework for policies that reconstruct the economy, invest in local economies, create jobs and rebuild public infrastructure. In doing so, it charts a new role for the state and offers a radical new public service management strategy. It is an equally important resource for all public sector employees. Incisive, timely and detailed, it is original in its research and analysis.

“In In Place of Austerity he sets out both to ‘develop a theoretical framework to better understand neoliberal transformation of public services and the welfare state’, and to offer campaign strategies and policy alternatives to this transformation. Whitfield is particularly strong on the role of the public services industry, which he says is more accurately labelled the ‘privatisation industry’ or, simply, the ‘big business lobby’.

“Understanding the real reasons for the assault on public sector workers is a first crucial step in calibrating our best response, especially if we hope to win some battles in this prolonged war. Dexter Whitfield systematically aids our task in this essential handbook for all those engaged in resistance from within unions as well as community and national coalitions.”

“…Whitfield maps out expertly the different and complex forms of private involvement in the public sector. He shines a light on those insidious forms of privatisation – that include the varied use of procurement, outsourcing and commissioning procedures – that have proved just as dangerous as the more aggressive forms of privatisation such as the wholesale selling off of public assets”

“…elegantly puts together different pieces of the jigsaw – the state of the economy, private sector influences on it, the undermining of public services and the welfare state, and how we might come together to resist the plans”

“This remarkable book is a thorough, detailed study of how we need to rebuild Britain, packed with evidence, facts and arguments proving that the Coalition’s policies are ruinous. He shows why we need new economic policies and better policies for public services.”

“…the volume provides a wealth of detail about how neo-liberalist approaches are subverting and replacing state provision, predominantly in the UK as well as other Organisation for Economic Co-operation and Development (OECD) countries. Three introductory chapters outline the ‘deepening crisis’ from 2007–2008; the continuing ‘neo-liberal transformation’ of welfare state services and the growth of corporate welfare.”

“…a substantial and significant contribution to the debate raging worldwide regarding the austerity agenda’s currently being propounded.” “You are led through the means by which the economy and state can be re-ordered and re-configured to our benefit rather than business benefit. There is a detailed appraisal of public services and an explanation of their importance complete with an underpinning strategy to achieve these ends.”

“For many of those fellow travellers who are opposed to Austerity “initiatives” and all of the grief, pain and hardship that they bring to people across the world, and for whom the issues were beginning to appear insurmountable to reverse…Here is your starting gun to effect change. Read, inwardly digest and take the alternatives forward in the practical and pragmatic manner that are offered here as nuggets of inspiration for and to an austerity free future.”