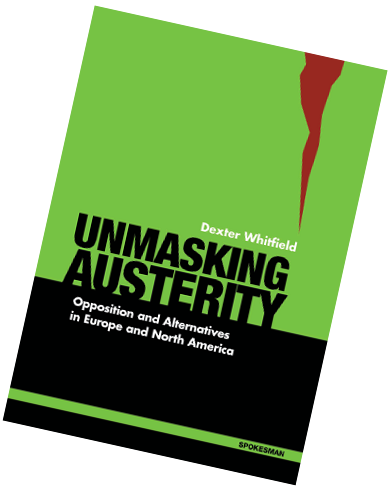 Unmasking Austerity: Opposition and Alternatives in Europe and North America exposes how austerity policies have fuelled the fire of recession rather than stimulated growth. It identifies key lessons from organising and action against such policies, and urges a rethink of trade union, community and social movement strategies to overcome austerity. Unmasking Austerity examines the deeper causes of the financial crisis, and exposes the manufactured crises which are being used to dismantle hard-earned labour rights and the welfare state.

Sebastian Schipper, Bauhaus-University Weimar: International Journal of Urban and Regional Research, Vol.39, Issue 3, 653-654 “The central strengths of Unmasking Austerity lie in its detailed but compact overview of both the numerous austerity policies and resulting social protests that have erupted across Europe and North America since the beginning of the global financial crisis, as well as in its offer of a concrete political alternative to further neoliberal restructuring. For these reasons, Whitfield has published a significant book worth recommending, not only to academics and urban scholars, but also to a much broader audience of social movement activists, trade unionists and indeed all people engaged in unmasking the claim that there is no alternative to austerity.”

Dave Putson, THE PROJECT, a Socialist Journal, July 2014 “It is full of detailed well researched and explosive exposes of neoliberalism and faux austerity”……….. “this is a seriously muscular work which is both compelling and painful in equal measure”

Edward Dingwall, Red Pepper, October-November 2015, No. 204  “…He offers another account of the massive transfer of wealth that took place when financial speculation emerged as crisis, and the early and disparate ‘anti-austerity’ flashpoints such as the Occupy camps, student protests and isolated strikes. While such initiatives seemed to staff, Whitfield sees how their energy actually spread into new connections, cross-pollinating alternative ideas and methods. His ready acknowledgment of these developments and their potential power is more forward-thinking than many other public services scholars. His proposals for organisational reform, priorities and effective economic levers are familiar, though, even if he ties them together more neatly than others manage.”

We need to draw lessons from the strategies used to oppose austerity policies and neoliberal ‘transformation’ of public services. New challenges include reversing the decline in labour share of national income and the slow pace of financial market reforms. Opposition to transnational free trade agreements must be strengthened. “New approaches to organising, building alliances and action strategies will require ideological and cultural change within trade unions, community and civil society organisations. Since ‘business as usual’ is not a viable public service option, neither is it an option for organisations opposing austerity and neoliberalism”. False Economy, September 2014.