ESSU research has consistently focused on the offshore infrastructure funds, which are liable for corporate tax in the country in which they are registered. Each PFI/PPP project has Special Purpose Vehicle (SPV) or company that is registered in the UK and liable to pay UK corporation tax. 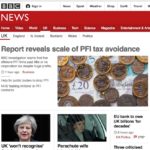 Each PFI/PPP project has an SPV, together with a holding company, which is responsible for the design, finance, construction and maintenance of new public buildings. The construction company, bank or financial institution and facilities management contractors are the shareholders of each SPV. They also usually contribute a portion of subordinate debt at relatively high interest rates to the project, although this is small relative to the senior debt provided by banks.

Local authorities, NHS Trusts and other public bodies repay these costs via regular unitary payments. The SPV pays UK corporation tax, but receives significant investment allowances which reduce the level of tax paid. It also pays annual dividends to the SPV shareholders financed out of profits.

The sale of equity in SPVs has soared.

The updated ESSU PPP Equity Database records 462 transactions between 1998-2016 involving the direct sale of equity of 1,003 projects (including those where equity was sold multiple times) at an estimated cost of £10.3bn.

All or part of a SPV shareholders equity and subordinate debt is sold in a transaction. After the sale of equity, the SPV pays dividends to the new equity owners that has led to an increasing flow of money going offshore.

The five largest listed offshore infrastructure funds made a total profit of £2.9bn in the five-year period 2011-2017. They paid a total of £13.5m taxes or a tax rate of 0.47%, when the £21.2m of tax credits is included. The five funds collectively paid ZERO corporate tax in the offshore territories where they have been registered for six years. Two of those funds published accounts to include 2017 and jointly paid no tax in the seventh year.

This represents a potential loss of over £600m in UK tax revenue had these companies been registered in the UK (based on UK corporation tax rates of that have declined from 26% in 2011 to 19% in 2017.

OWNERS OF 22 CANADIAN P3s USE TAX HAVENS TO AVOID TAXES

Ottawa (06 Nov. 2017) — Because of their use of tax havens, 4 companies with extensive investments in Canadian P3 privatization schemes paid less than 1 per cent in income tax in 2016. A lot less.

In 2016, the before-tax profits of these 4 companies added up to $981.5 million. However, the total tax bill was only $1.2 million or 0.12 per cent. The reason for such low tax bills is that all of these investment companies have their headquarters in tax havens — 1 in Luxembourg and 3 on Guernsey in the Channel Islands.

“Thanks to P3 privatization schemes, money that should be funding quality public services is ending up in tax havens,” said Larry Brown, President, National Union of Public and General Employees (NUPGE).

“It’s not just students and households with credit cards who are being ripped off. The scandal of the Private Finance Initiative, launched by John Major, has resulted in huge, long-term costs for tax payers, whilst handing out enormous profits for some companies. Profits which are coming out of the budgets of our public services.

Over the next few decades, nearly two hundred billion is scheduled to be paid out of public sector budgets in PFI deals. In the NHS alone, £831m in pre-tax profits have been made over the past six years. As early as 2002 this conference regretted the use of PFI.

Jeremy Corbyn has made it clear that, under his leadership, never again will this waste of taxpayer money be used to subsidise the profits of shareholders, often based in offshore tax havens. The government could intervene immediately to ensure that companies in tax havens can’t own shares in PFI companies, and their profits aren’t hidden from HMRC.

We’ll put an end to this scandal and reduce the cost to the taxpayers. How? We have already pledged that there will be no new PFI deals signed by us. But we will go further. I can tell you today, it’s what you’ve been calling for.

Labour today commits to signing no new PFI deals, to look to bring existing contracts back in-house and to develop alternative public sector models for funding infrastructure, saving the public money and improving services and working conditions. Labour will review all PFI contracts and, if necessary, take over outstanding contracts and bring them back in-house, while ensuring NHS trusts, local councils and others do not lose out, and there is no detriment to services or staff. On top of the billions of pounds paid out to shareholders, an estimated £28bn is being lost through costs incurred by problems associated with PFI, including higher interest rates, bail outs and management fees.

1.  Review, in conjunction with local authorities, NHS Trusts and other public bodies, all PFI contracts to assess the SPVs’ performance on:

– labour and equalities impacts, and wages;

– quality of delivery on service and construction contracts.

2.  Consult on amending or repealing legislation which provides government underwriting of unitary payments to PFI companies whilst ensuring the sustainability of public sector budgets reliant upon previous forms of PFI credits and payments. Existing PFI schemes were supposed to remove risk from the public sector but have failed to do so.

3.  Consult on appropriate methods for returning the ownership and responsibilities of SPVs [special purpose vehicles] to the public sector, with shares-for-bonds nationalisation (via an Act of Parliament) the presumed preferred approach. Shares held in countries deemed tax havens may be compensated at a different rate from others. Differential compensation rates for equity held by pension funds will also be considered.

4. Ownership of assets and responsibilities for services will be returned to the bodies who have been paying for them, and who no longer need to make unitary payments.

5.  Develop a new public sector design/construction model based on public investment that enhances public sector capabilities to plan, design, manage and operate public infrastructure. Examples we will consider include the USA’s construction management at-risk. Our intention is not just to take over existing assets but to build the capacity to deliver projects better in future.

6.  Enshrine the rights of staff to have rights kept or enhanced to comparable public sector standards on transfer to public sector bodies.

The European Services Strategy Unit is pleased to launch a radical redesign of the website — www.european-services-strategy.org.uk. Many thanks to Chris Croome of Webarchitects Coop (who have hosted and supported the website since 1998) and Mina Nielsen for the redesign. Hopefully the website is easier to navigate and access the large volume of evidence. If you experience any problems, please icontact us.

The the old site has been archived — european-services-strategy.org.uk.archived.website.

Details 11 buyouts, 20 terminations and 43 projects with major problems, plus many bailouts, accounting for 28% of PFI/PPP contracts by capital value. The public cost of buyouts, bailouts, terminations and major problem contracts is £27,902m, when combined with the additional cost of private finance, interest rate swaps and higher PFI transaction costs. This could have built 1,520 new secondary schools for 1,975,000 pupils, 64% of 11-17 year old pupils in England. The UK’s 6.8% ratio of buyout and terminated contracts is higher than the 5.4% average of World Bank projects in developing countries for terminated contracts. This ESSU Research Report explains the causes and fundamental flaws in the PFI/PPP model.

On 1 April 2017 the operation of the Tyne and Wear Metro finally returned to public provision. The North East Combined Authority decided not to extend the Deutsche Bahn 7-year operational contract for a further two years because of dissatisfaction with service performance. A new fleet of trains is planned in the next few years, however, the government is insisting on retendering the contract in 2019. RMT General Secretary Mike Cash said “The union is demanding that there is no repeat of the privatisation mistake and that the Metro service is now permanently returned to the public sector – run as a public service in the public interest.” 86% of a ChronicleLive public poll last year voted for the Metro to stay publicly run. An ESSU briefing ‘Not Fit to Run the Metro’ for the Northern TUC, UNISON and UNITE exposed Deutsche Bahn’s track record in Germany in 2009 prior to the contract.

Somerset County Council plans to transfer the Council’s Learning Disabilities Provider Service to a new social enterprise established by Dimensions (UK) Ltd in April 2017. The service has an annual budget of nearly £30m and 1,160 staff. The social enterprise has announced plans to reduce all terms and conditions for the whole workforce, impose immediate redundancies, and to ‘redesign’ services with closures. This brief analysis highlights the risks and potential dire consequences of transferring services to social enterprises and arms length companies.